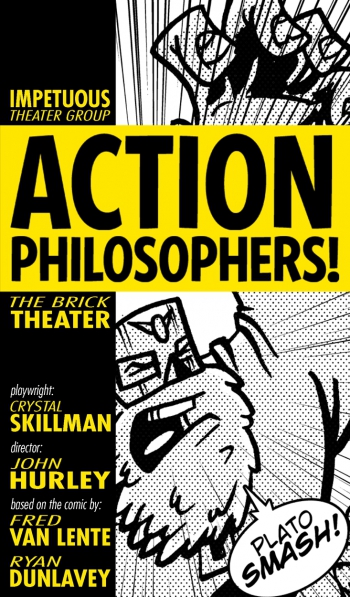 One of the coolest things ever - Action Philosophers, the comic series by Fred Van Lente and myself, was adapted for the stage by Crystal Skillman and had its premiere performances at The Brick theater in mid-2011, in a production directed by John Hurley.

Not pictured - Ryan Andes as René Descartes and Ben Fine in his dual role as Friedrich Nietzsche. The entire cast played multiple supporting roles in each philosopher's segments.

I found a promo video on Youtube, complete with an original theme song!

It was such a thrill seeing some goofy underground comics I'd drawn mostly as a joke brought to life by so many talented people. It was popular enough that they mounted a second production in October of the same year with CL, Joe and Neimah returning to their roles, joined by Timothy McCown Reynolds, Matthew Trumbull and Kristen Vaughn as Neitzsche/Sarte, Descartes and Rand, respectively. Fingers crossed for a revival someday but in the meantime you can purchase Crystal's adaptation of the play right here!